CARDIFF – Mark Nawaqanitawase has explained his attacking mindset and says he’s staying “chill” despite his meteoric rise from sixth-choice Waratahs back to one of the Wallabies’ great next hopes.

On a gloomy end of season Spring Tour, the 22-year-old has been one of the shining lights for the Wallabies.

He was arguably the only positive coming out of the Italy disaster and once again the Test rookie starred during the Wallabies’ three-point loss against Ireland in Dublin last weekend.

As The Roar colleague Nick Bishop wrote on Tuesday, Nawaqanitawase has given the Wallabies a point of difference and, for the first time since Israel Folau’s messy departure from Australian rugby, an aerial threat.

The sight of him climbing over Irish defenders, including Canberra-born Mack Hansen, was something to behold on a freezing evening at Aviva Stadium.

The winger is 192cm – one centimetre shorter than Folau, who scored 37 tries for the Wallabies and won the John Eales Medal three times after making his debut on the wing against the Lions in 2013.

He also has the unique ability to offload, something the Wallabies have lacked in recent years. The leaps and offloads are qualities Folau had in spades.

But you won’t hear the Eastwood outside back put tickets on himself.

“Just keep doing what I’m doing I guess, just keep to myself,” he said. “I’d like to think I’m chilled, so just don’t read into anything and just keep enjoying it and having fun.”

Nawaqanitawase had a team-high 15 runs on the weekend, making 54 metres with the ball, beating four defenders, and getting away three offloads.

But more than the numbers it was Nawaqanitawase’s willingness to get involved from the outset that had observers captivated.

Nawaqanitawase, who cut an imposing figure at training throughout the week in long tracksuit pants and a singlet, said it wasn’t so much a licence he had to go hunting for the ball but an inner confidence to back his ability.

“I’d like to think I’ve got an offload game there,” he said. “It’s definitely something I feel I can get in terms of my game, I think I can get through contact most of the time and I’m fortunate enough to have some long arms so I try look for the boys when I’m out there.

“They (the coaches) always give you the license, it’s just whether or not you’re going to do it yourself. Some players hold back a bit with like systems and stuff like that, but I think I’m just confident in myself to go out there and just go looking for it.” 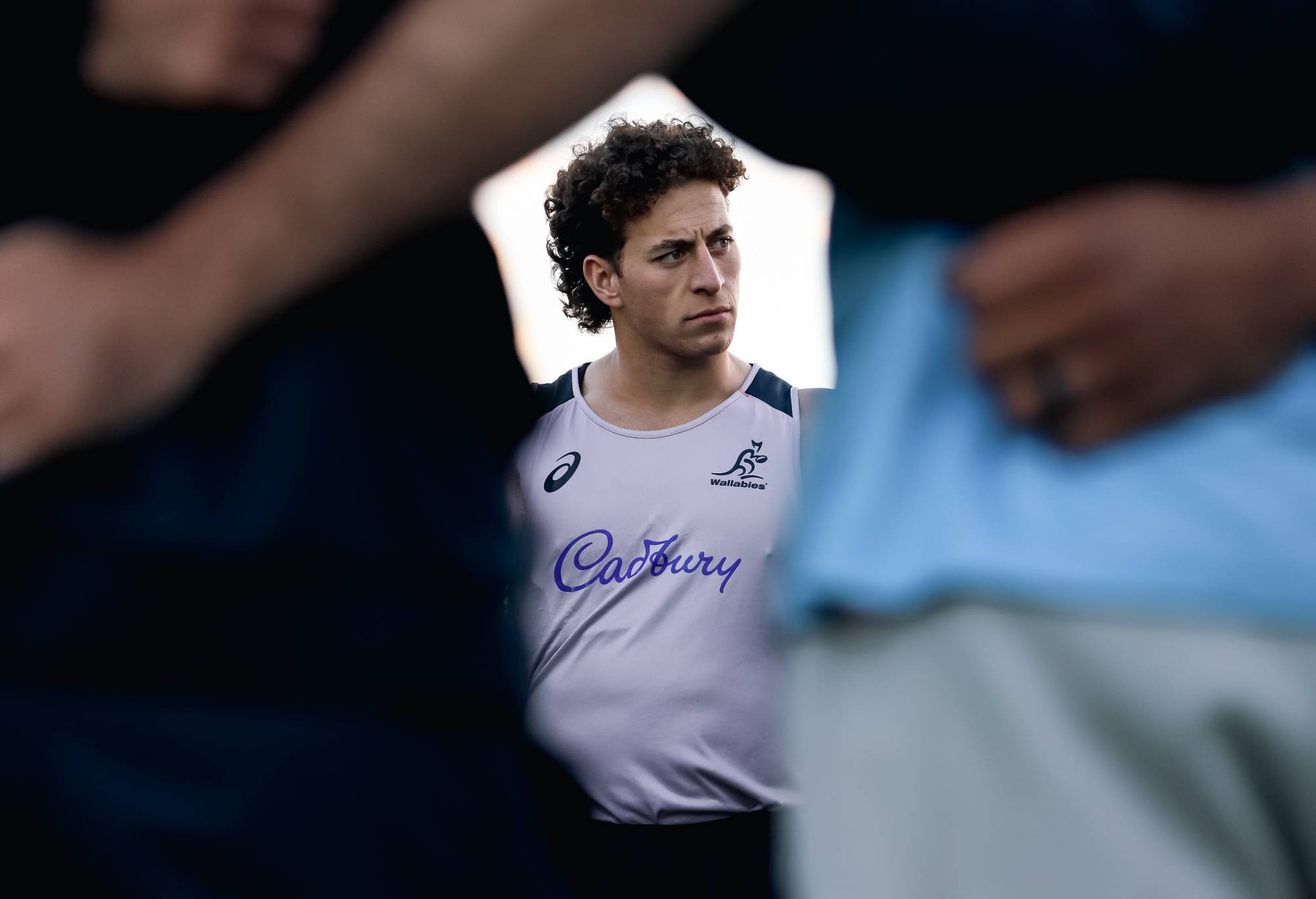 Throw in Jordan Petaia, who starred off the bench in one of his strongest performances in gold since debuting in the 2019 World Cup, and the Wallabies have two aerial threats on the wing and dual targets on either side of the field.

Len Ikitau said it was exciting to have those two options.

“It was awesome to have Marky on the wing there,” Ikitau said.

“Obviously he’s excellent under the high ball, and when Jordie came on we had two wingers who you just had to kick them the ball and they’d get up for it and get it back for us.

“I think it just gives us two big wingers who are willing to carry and then if the ball goes up, getting up for the ball, so it was awesome.”

Ikitau has been the one constant in a team that’s ever-changing.

The outside centre, who has missed just one Test this year due to a calf injury, said it was “on the players” to deliver against Wales at the Principality Stadium on Sunday (AEDT).

“Dave’s got an awesome system and the way he wants to play and I think for us it’s going out there and executing and I just don’t think we’ve been doing that the last couple of weeks, especially against Italy. It’d be nice to finish off the last game with the win and go forward from there.”

Not for the first time this year Ikitau was forced to shift to inside centre against Ireland after Hunter Paisami’s injury.

The Brumbies centre, who grew up playing rugby league, admitted shifting one spot closer to the action was testing him, but added that he was constantly looking to try to spend as much time in the role during training.

“I was thinking about that actually. I’ve played 12 maybe three times my whole career and it’s against the All Blacks, South Africa, Ireland, so that’s three big teams and it’s pretty tough,” he said.

“I always say to Wisey (attack coach Scott Wisemantel) that I need reps at 12 just in case injuries happen, and that proves why. I’ve enjoyed it. I love playing 13 but 12’s a good learning experience.”