ANALYSIS: Positives emerge on Wallabies' Spring Tour, including a successor to Israel Folau

A beckoning, white-gloved hand and a smiling clown-face, with just a hint of cruelty at the edge. Step forward ladies and gentleman. Wild rides, and all the fun of the fair await you as a Wallabies supporter.

Every game will be an emotional roller-coaster, with gut-wrenching turns and drops. More often than not, your heart will be in your throat. The highs and lows may become so exhausting that eventually, they will become indistinguishable.

That may very well describe what it is to be an Australian rugby fan in current times. The light is so intermingled with the dark, the switches of emotion are so swift and complete that it feels like your feet never touch the ground at all.

On the current end-of-year-tour, there have been three losses and one win so far. Australia could as easily have lost to Scotland as they might have beaten France. They lost unexpectedly in Florence and had victory within their grasp in Dublin. Three results have been by one point either way, and the finale of all four rounds have represented rugby’s version of ‘sudden death’, with rather more than a hint of cruelty in the final twist of the tail.

The roller-coaster principle has permeated every aspect of Australian play. The Wallabies play Jekyll-and-Hyde in too many areas. Doctor Jekyll, through the excellent work against Antoine Dupont at the ruck-base in Paris, developed further versus Jamison Gibson-Park in the fair green city.

Mister Hyde, via the succession of four neck-roll penalties which led to a yellow card on Folau Fainga’a in Dublin. Dave Rennie and Dan McKellar’s version of ‘breakdown brutality’ still attracts no mitigation in refereeing eyes.

There are too many matches with the No. 10 lurking invisibly in the play-making shadows, like Noah Lolesio with his three touches from first receiver in Florence. Some daylight returned in Dublin, with Bernard Foley enjoying no less than 20 first touches against the men in green.

At the Aviva Stadium, the clouds parted, the moon became full and the Wallabies suddenly morphed into a ball-control team, building 112 total rucks in the game, about 40 more than their seasonal average and 36 more than the home side.

Seventy-four of those rucks were created in and around the Irish 22; but 11 visits to, and a total of over seven minutes spent in the red zone yielded a spare harvest of only 10 points, with eight turnovers of possession. For the record, the best red zone attacks will look for an average yield of 2.5-3 points per visit, so an 0.9 point return is rather less than sub-par.

Who do the Wallabies want to be, and where will the game-plan eventually land when it returns to planet earth? It is an impossible question, pitched as it is in the middle of a coaching identity crisis.

Promise lies with the emergence of some new individual contenders and combinations for the World Cup: Nick Frost and Will Skelton in the second row, Lalakai Foketi at number 12 and now Jordie Petaia and Mark Nawaqanitawase in the back three, have all put their hands up strongly for selection.

As Dave Rennie commented in his post-match presser:

“We [have] obviously played the top two sides in the world [Ireland and France] at the moment and probably did enough to beat both of them, but [we] didn’t. We’ve got to look at why.

“There’s a huge amount of character in this group. We left a lot of players [at home] through injury and unavailability and a lot of guys are really stepping up and, as we showed again tonight – more adversity but we’ve got enough character to stay in the fight.”

The single most impressive aspect of Australian play in Dublin was their control of the airwaves. With Jordie Petaia coming off the bench in only the fourth minute of the game to replace Hunter Paisami and Andrew Kellaway moving into the centres, it gave the Wallabies a big back three of Mark Nawaqanitawase and Petaia book-ending Tom Wright at full-back: 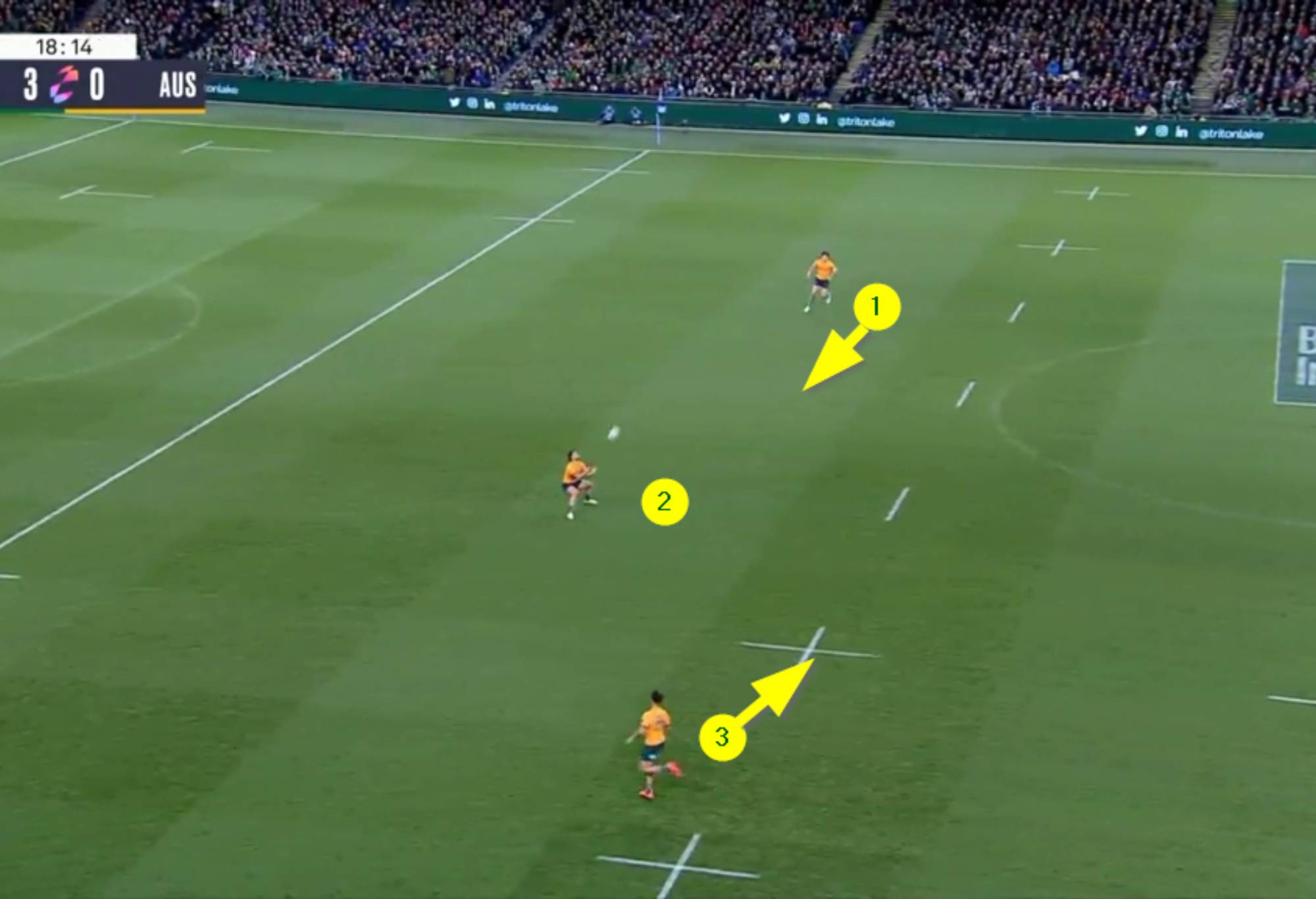 The combination immediately looked far better balanced than the undersized group of Wright, Kellaway and Jock Campbell which had started the two previous tour matches.

Between them, Wright, Marky Mark and Petaia accounted for 14 breaks or tackle busts, six offloads, four break- or try-assists and a whopping 54% of total Wallaby yardage on the carry. They also generated six turnovers on contestable kicks while maintaining a perfect 100% record in their defence of the high ball.

Australia have not had such a commanding figure as Nawaqanitawase in the air since Israel Folau was lost to the team. He has always been imperious off the ground, and his newly-developed ‘big body’ gives him added physical presence in defence:

This is what separates the dominant aerial receiver from the merely adequate: the ability to use strength to take the ball forward after the receipt has been made, or take the ball above head level in Aussie Rules style and then offload to a support player (in this case Will Skelton) in a better position.

The presence of an equally big man alongside him in the backfield pulled the best out of Petaia when he entered the fray. Petaia and Nawaqanitawase combined for four turnovers directly in the air or at the chase-ruck after a catch, and two further Irish errors came with the beating hoof-beats of one of the big men pounding in their ears:

Both Petaia and Nawaqanitawase had the wood on their opposite numbers (Jimmy O’Brien and Mack Hansen respectively) in the air, and there was little Ireland could do about it. In the second example, Marky Mark uses his strength to bully Hansen back in the tackle, and the new man-of-Connacht was fortunate not to be penalized for playing the ball twice on the deck.

The second instance is symbolic, because the Wallabies probably could have profited from the cross-kick far more than they did on attack when the Irish wings were isolated one-on-one, just as the All Blacks had done versus England earlier in the afternoon.

The new, injury-enforced back three showed some very promising signs in attack with Wright as the attacking hub from full-back:

In the first instance, Wright is making the attacking decisions, linking with Petaia going right on the kick return in the first instance, and setting up Nawaqanitawase from lineout on the left in the second. The big young Waratah duly beat Garry Ringrose on the fold out towards touch, and that is a difficult task indeed for any wingman.

On other occasions, the two wingers from Queensland and New South Wales combined together just as effortlessly without their Brumby link-man, not least for Australia’s only try of the game:

On the scoring play you have the Leaguer’s delight: two fast, skilful big men running at two over-matched defenders: Nawaqanitawase and Petaia versus a forward (Jack Conan) and a diminutive scrum-half (Craig Casey) on the right side of the field. It is a picture well worth repeating from the Wallaby point of view.

If you like thrills of the ‘Extreme Sports’ variety, then the Wallabies are the team for you to support. Matters always seem to be perched on the edge of a vast unknown, where Australia is frustratingly capable of beating the best in the world, yet repeatedly unable to find either a consistent standard of performance or the winning edge in tight games.

To watch the Wallabies match-in, match-out is cruel and unusual punishment indeed, though not without its moments of peak pleasure. The crisis of coaching identity is reflected in a series of unresolved questions: do the Wallabies want to play primarily with, or without the ball? Are they going to attack off number 9 or number 10? Can they clean out rucks technically and aggressively, but without trying to part the head of their opponents from their shoulders?

It is just as well that the dark shadow of Mister Hyde – the constant U-turns in strategy – is leavened by the daylight of Doctor Jekyll – the genuine stock of individuals rising, and new combinations forming in the selection lab.

The end-of-year tour has already thrown up a large and powerful locking duo in Nick Frost and Will Skelton, and they have formed a reliable lineout and ball-carrying triangle alongside number 6 Jed Holloway.

Lalakai Foketi has shown enough positives to be a worthy partner for Len Ikitau when Samu Kerevi is not around. At the back the two big men – Jordie Petaia of the Maroon and Mark Nawaqanitawase of the Sky Blue – made their case against the world’s number one ranked side in Dublin.

If Dave Rennie is not going to pick Reece Hodge, at least he can at least select one, or even both of the tall timbers from the Origin states. As Tim Horan commented on Stan Sport: “Jordie Petaia, if he stays fit for the next 12 months, he will start in the [Wallaby] number 15 jersey at the Rugby World Cup. He’s an outstanding player, an X-factor player.”

Petaia or Nawaqanitawase can cover Wright’s defensive weakness under the high ball while promoting Australia’s offensive ability in the same area to Israel Folau-like levels. They can open up the field for the cross-kick, and exploit the kind of mismatches that two big men, working in tandem provide against modern defences. Add Andrew Kellaway and Marika Koroibete to that brew and it is a heady mix. Suddenly the fun of the fair beckons with its brightly-lit delights – and fewer the black, heart-stopping moments.

Nicholas Bishop
Expert
Nick Bishop has worked as a rugby analyst and advisor to Graham Henry (1999-2003), Mike Ruddock (2004-2005) and most recently Stuart Lancaster (2011-2015). He also worked on the 2001 British & Irish Lions tour to Australia and produced his first rugby book with Graham Henry at the end of the tour. Three more rugby books have followed, all of which have either been nominated for or won national sports book awards. Nick's latest is a biography of Phil Larder, the first top Rugby League coach to successfully transfer over to Union, entitled The Iron Curtain. He is currently writing articles for The Roar and The Rugby Site, and working as a strategy consultant to Stuart Lancaster and the Leinster coaching staff for their European matches.
close