For 20 minutes Australia led the World Cup holders France, before the class of Kylian Mbappe and Olivier Giroud destroyed the Socceroos 4-1 in their World Cup opener in Qatar.

Giroud, the AC Milan striker formerly of Arsenal and Chelsea, scored twice to take his international tally to 51 and equal the French record held by Thierry Henry.

It was a devastating occasion for the Socceroos, who shockingly took a fifth minute lead through a goal of real quality. From then on all the flair and fizz flowed from the French, particularly the feet of Mbappe as the Paris Saint-Germain superstar gave Nathaniel Atkinson, who plays for Heart of Midlothian in Scotland, a torrid time.

“It’s been a tough night for Atkinson,” said Harry Kewell after Mbappe scored the fourth. “It’s going to be one he won’t forget against one of the world’s best players. It’s a tough ask but welcome to world class football.”

The earlier 0-0 draw between Tunisia and Denmark in Group D left Australia adrift at the bottom of the standings through one match.

Australia stunned France in the fifth minute with a goal of high quality. Mat Leckie brought down a long ball from Harry Soutar on the right and skinned a flailing Lucas Hernandez, who was forced off with a knee injury after tumbling on the turf.

Leckie’s curled cross behind the French defence was met by Goodwin who swept his shot into the roof of the net.

“Australia started really well. Not only the pressure on the ball, but also when we had the ball we were confident with the ball and comfortable on the ball,” said 2006 Socceroos goal scorer John Aloisi on the SBS coverage.

“It was a well deserved goal for the start of the game, the way that we played out and were playing with the ball. It’s a great ball from Harry Souttar and Leckie does exceptionally well. We’ve got bodies in the box. That ball was unbelievable from Leckie but don’t underestimate that finish.”

The French players looked shocked as the Socceroos mobbed Goodwin and coach Graham Arnold punched the air in delight. 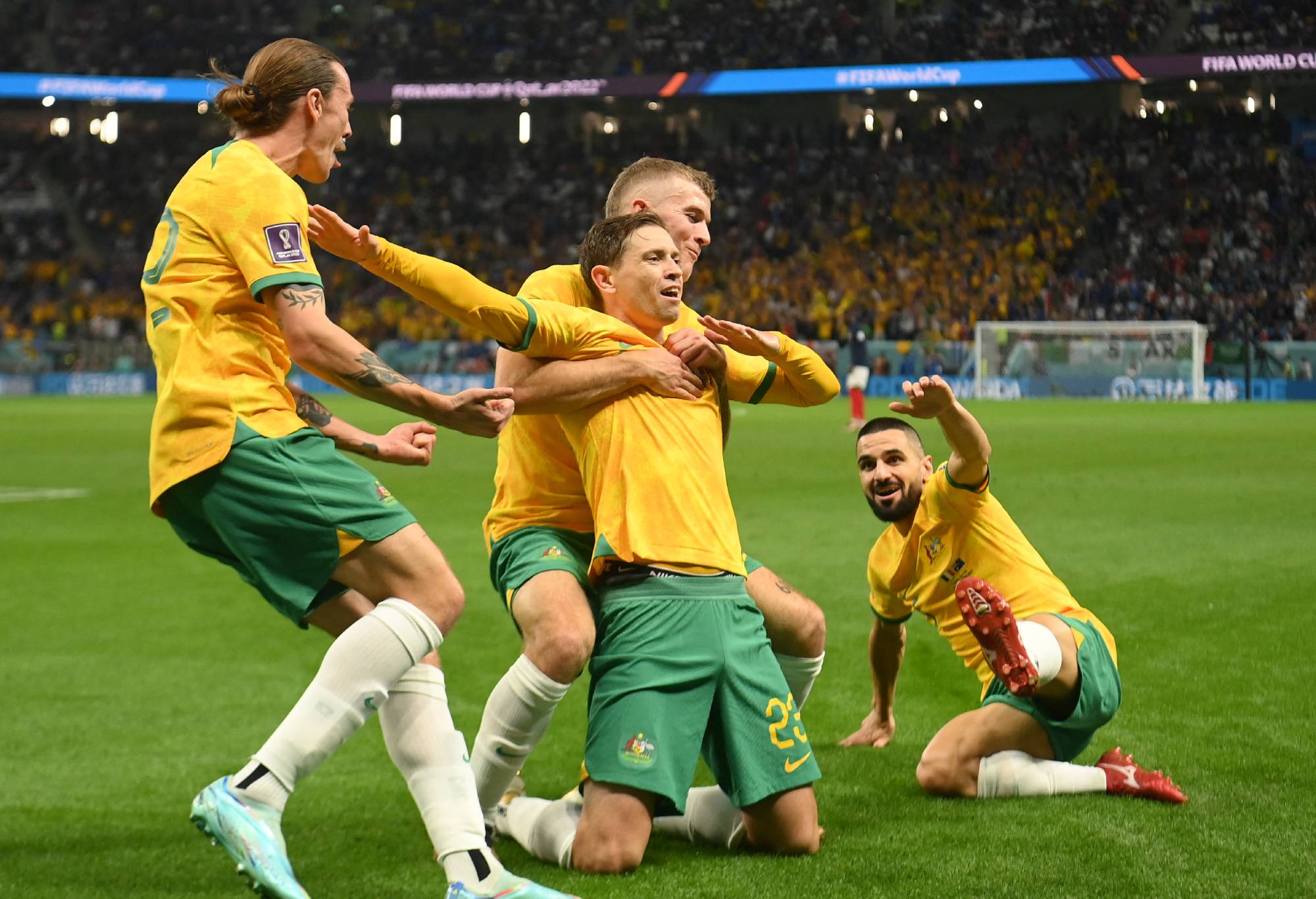 Australia would have expected a backlash and it came through the speedy raids of Mbappe, terrorising Atkinson down the left, and Ousmane Dembele down the right.

Australia were being pinned back – Socceroos legend Kewell complaining in commentary that they had abandoned their early tactic of pushing in behind the French with early balls forward after taking the lead.

It was a recurring theme all game with Kewell saying the Socceroos looked “shy”.

France went level on 27 minutes when the Australian defence lost Adrien Rabiot in the box. The Socceroos cleared the initial corner from Antoine Griezmann but as it was swung back in Rabiot had too much space and time to head past Mat Ryan.

Just four minutes later France were ahead and it came from a moment of naive and undisciplined defending. Ryan’s short goal kick was played by Jackson Irvine out wide to Atkinson who had a shocking first touch. The ball was picked off by Mbappe who passed quickly to a surging Rabiot. He picked out Giroud for an easy tap in and his 50th goal for France.

“They were under a lot of pressure here. Mat Ryan doesn’t need to play that as a short goal kick. All he needs to do is say to his defence ‘listen, we’ve been under pressure’ and and knock one long.

“As soon as you put them under pressure like that in that situation when they’re tired you’re asking for trouble.”

Aloisi added: “A lot of people will start criticising Atkinson for losing the ball, but he lost the ball out in a wide area. How was our positioning behind him? Don’t run past the ball, just give him that cover.”

Another former Socceroo, Craig Foster, said Australia needed to be able to show the quality required to play out from defence, but Bozza doubled down on his pragmatism.

“The vast majority of the first time I saw him Nathaniel Atkinson, running towards his own goal against arguably the best player in the world at this time,” said Bosnich.

“Coming back to my point, as a goalkeeper, I’m thinking we’ve been under a lot of pressure. Okay, it’s not the time to do this. There’s no need to do that.”

France should have gone further ahead on 45 minutes when Griezmann flicked a delicious square ball from the right and Mbappe was charging through into the six yard box. Instead of driving the ball into the net with a header he volleyed, incredibly, over the bar.

Australia almost levelled just before the break when Riley McGree stood up an excellent cross from the left byline and Irvine’s header bounced down and agonisingly off the outside of the post.

“We can’t let our concentration slip,” said Kewell. “The key is pick up the second ball and if we can pounce on them we’ve got a chance.”

Kewell got the concentration he desired but the quality gulf was evident. Giroud put a spectacular volley just wide of Ryan’s post while desperate spoiling defence carried Australia to the hour mark without further concession.

Then Mbappe got the goal he’d been striving for. His pass across the box was retrieved on the right by Dembele who delivered a peach back into the centre of Australia’s six yard box.

Mbappe snuck in front of Souttar and flicked in his header for a deserved third.

“We could see that coming,” said Kewell.

Giroud added a fourth and the game was put to bed well before the finish.

“It’s disappointing because we started so well. The confidence was flying but that little lack of concentration, maybe shyness of not playing forward or aggressive allowed France to take complete control and play to their tempo.”

“Yeah look at the end of the day they’re a quality side. They’re world champions for a reason,” said Arnold.

“I was happy with the first half. Second half we ran out of legs a bit, but that’s the type of level these (French) players play at.

“We’ll pick the boys up for sure. They should be proud of their effort, the commitment they gave. But again, they are the world champions for a reason.”

Australia next face Tunisia on Saturday night (9pm AEDT) before a meeting with Denmark next Thursday.