Ben Simmons is still a long way from getting back to his best but he’s starting to earn respect again on the basketball court.

The controversial Australian stepped into a viper’s nest known as the Wells Fargo Center and showed the swagger that has been missing for the best part of two years.

It doesn’t particularly matter that Brooklyn lost to his old team even though the 76ers were heavily depleted.

His encouraging stat line in his first clash with his former side was also not the most important aspect of his performance.

It was the fact that he didn’t shy away from the moment.

He knew he was going to be booed by Philadelphia’s famously raucous home fans who had cheered him for his first four seasons in the NBA.

And they did. Giving it to him from the pre-game introductions and pretty much every time he touched the ball in the 115-106 defeat.

But he didn’t back down.

When asked after the game his thoughts on the Sixers fans’ chorus of boos, he shrugged it off with “I thought it was gonna be louder” without looking the least bit worried. “I feel like I’m in a good place. I’m happy. I do what I love. To be out there and having that experience was amazing.”

He’d pre-empted his bravado prior to the game by saying he “can’t worry about everyone’s feelings” and “I’m not here to make everybody happy”.

This is what we’ve all been waiting to see from Big Ben. We knew he had it in him, he claimed the fire was still burning inside and this can be a career-defining point in his career where he gets back into the All-Star and All-NBA conversations. 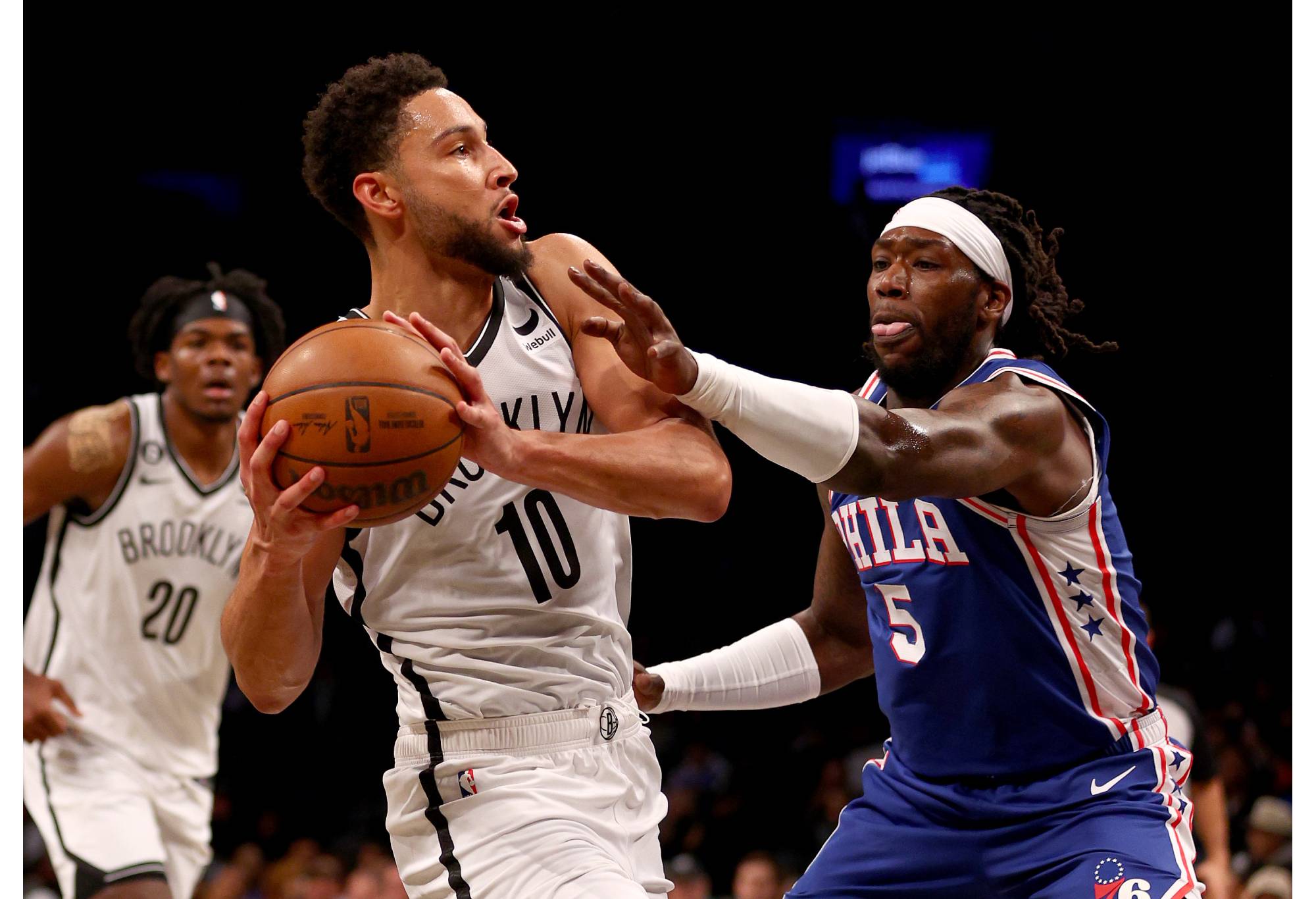 He’s starting to get back into the groove after missing last season altogether for a variety of reasons, partly due to injury, his declaration that he wasn’t mentally ready to suit up for the Sixers but mainly because of the petulance he displayed in demanding a trade.

The 26-year-old former No.1 pick played 32-plus minutes against Philly and tallied 11 points, 11 assists and seven rebounds to go within touching distance of what would have been his first triple-double of the season.

He silenced the razzing of the crowd with three blocks and a superb hustle play to steal the ball from De’Anthony Melton, then dive on the floor to knock the loose ball forward so All-Star teammate Kevin Durant could slam home an uncontested dunk.

After not doing much of anything at the offensive end in his first nine matches, he’s now scored in double-figures in four straight games while also averaging 6.8 rebounds and 6.1 assists for the Nets this season.

Brooklyn are 7-5 over their past 12 games but their hot and cold season has them 10th in the Eastern Conference with an 8-10 record.

The Barclays Center has a scoreboard out the front of the building like trailer parks in the tornado belt displaying “days since last disaster”.

They’re nearly up to double figures in days since Kyrie Irving’s selfishness has undermined the team or Durant has vented in the media to express his frustration with teammates, the coach, the front office, the world.

It’s still a highly combustible situation and not necessarily the best situation off the court for Simmons to rebuild his career.

If the off-court distractions can be kept to a minimum, his combination with Durant and Irving still has the potential to lift the Nets not only high up the standings but deep into the playoffs.

But you wouldn’t bet on it.

Even so, Simmons’ main goal this season should be a selfish one – to rebuild his career by regaining the respect of the NBA world with exactly the kind of performance he put up against the 76ers and if the Nets make a playoff run after all the franchise’s recent dysfunction, that’d be an added bonus.

Green means go: Young Boomers guard Josh Green is continuing his rapid rise in Dallas with a career-high 23 points earlier this week in a 98-97 loss to Denver.

His three-point stroke, which was virtually non existent in his first two seasons, is becoming potent – the Sydney-born 22-year-old hit six from seven against the Nuggets, getting a well-deserved 30 minutes, which is hopefully a sign of things to come.

Bennedict Mathurin could win rookie and sixth man of the year: The Indiana guard was taken with the sixth pick in the NBA Draft but is outshining his rookie class with his stunning efforts for the Pacers.

Averaging 19.3 points per game to be the highest scorer among rookies, he’s also scored more off the bench than any player this season. If coach Rick Carlisle continues to hold him back from starting, Mathurin could be the first person to win the rookie and sixth man gongs. Chicago’s Ben Hordon won the Sixth Man award in his first year but was not the top rookie, losing out to Charlotte centre Emeka Okafor.

Wizards not woeful for once: With the Pacers (10-6), Jazz (12-7) and Kings (11-7) getting all the attention for heavily exceeding expectations, the Wizards are somewhat flying under the radar but Washington are now up to fifth in the East with a 10-7 record. The Wizards are getting decent production out of injury-prone centre Kristaps Porzingis (20.4 points on 46% shooting, including 38% from three, plus 8.8 rebounds per game.

All four teams could come tumbling down like a house of cards in the next few weeks but their long-suffering fans are at least getting a glimpse of success. Although it can be the hope that kills you.

Brooklyn Nets are descending further into chaos, which puts Ben Simmons more under the spotlight. 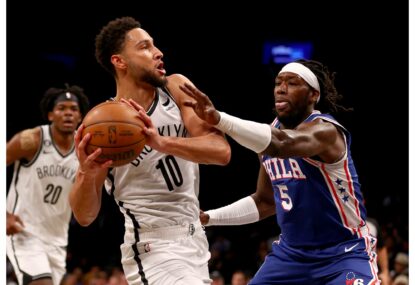 All the talking points from the first couple of nights in the NBA. 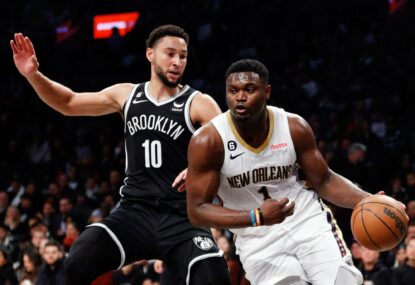 Ben's back: Simmons struggles in NBA return at Nets but 'had a lot of fun out there'

Ben Simmons has returned to NBA action after a year and a half out of the game.

Ben's back: Simmons struggles in NBA return at Nets but 'had a lot of fun out there'

Net loss on the way: Why Durant staying at Brooklyn won’t end well, especially for Simmons

Kevin Durant now wanting to stay at Brooklyn will end in tears. And it's not good news for Ben Simmons. 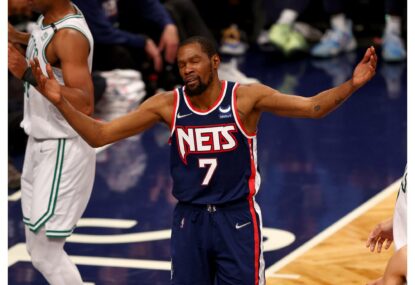 Net loss on the way: Why Durant staying at Brooklyn won’t end well, especially for Simmons

Has Ben Simmons made the right decisions in the last year?

Ben Simmons has been one of the most talked about basketball players not to play a game last season. To be fair, the Australian…

Has Ben Simmons made the right decisions in the last year?