One was a draw and shouldn’t have been. The other was not but should have been.

It was an unusual scenario, especially as the twin outcomes occurred within a few hours of each other, but if last weekend achieved one thing, it was to highlight a similar and fatal flaw shared by each of the All Blacks and Wallabies.

While England’s remarkable recovery from 19 points down in the last ten minutes owed plenty to the belief that Eddie Jones has instilled in his men, it also spoke to the All Blacks’ ability to mentally disintegrate under pressure.

This is a trend that has become all too familiar since the 2015 Rugby World Cup.

An inability to overcome the unexpected – or, more correctly the unanticipated – played a big part in each of the failures to beat the 2017 British and Irish Lions and the semi-final exit at the Rugby World Cup two years later.

Coach Steve Hansen had ‘depowered’ his leadership group after the core of the 2008-15 side retired, and this showed when the torch was applied through the final four years of his tenure.

His assistant and successor, Ian Foster, inherited the flaw.

Not only has he not been able to ‘repair’ this weakness, but it has also spread.

That is not on Foster alone. It is also a consequence of similar failings across various teams in Super Rugby.

The players spend most of their time with Super Rugby teams. This is where their habits and on-field traits are moulded.

The Crusaders keep winning because of innovative coaching, but they also have nearly always had the best core player leadership group, who are given full licence in key decision-making by their coaches.

This experience is passed on generation by generation.

But Super Rugby is a far lower level of play than top international footy, and recent years have shown it is becoming increasingly less fit for purpose as far as the step-up to Test matches is concerned.

Whether Crusaders coach Scott Robertson could achieve more at the higher level given the players and more particularly the leaders, he would be inheriting in the All Blacks, is a moot point.

We might be able to judge that in the future, whether with the All Blacks or maybe even England, but he might wind up with neither role.

The All Blacks’ collapse against an English opponent that kept coming put a dampener on a game where, for the most part, they had played pretty well.

The result didn’t end the team’s unbeaten sequence, which now stands at seven, but it has meant that the questions as to whether New Zealand is on the right track remain unanswered for all but the most optimistic heading into the summer.

In settling for the draw, the English were criticised by many, especially in New Zealand, which I found misguided.

Put the boot on the other foot. Had the All Blacks recovered in an identical situation at Eden Park, would the Kiwis have wanted their team to run the risk of losing what had unexpectedly been gained by attacking deep within their own territory against a set defence?

Imagine the criticism had it done so, made a mistake and surrendered the Test.

The Scots know the feeling, having stunningly overturned a 31-7 halftime deficit against England at Twickenham in 2019 to lead 38-31, only to then make an unnecessary mistake in injury time, giving up a converted try in the 84th minute.

Thus a famous Calcutta Cup victory was snatched away in heartbreaking fashion.

So, to Dublin and the Wallabies’ decision to kick for touch in the final moments when after an effort full of energy and industry, if not quality, a draw was there for the taking via a Bernard Foley goal.

As one of the best – if not the best – clutch goalkickers in the game, it is highly unlikely Foley would have missed his penalty attempt. 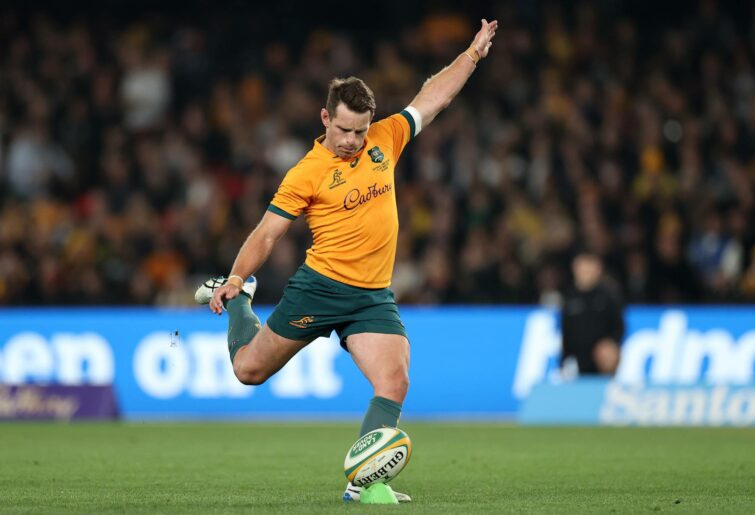 Given the year the Wallabies have had and especially after last week in Italy and the late concession two weeks ago against France, a draw at the home of the team currently ranked number one in the world was surely a great result.

So why not take it?

After all, the Irish had comfortably dealt with the Australian maul throughout the game, and as the Wallabies huff and puff but are ultimately one-trick ponies – with backline incision almost as rare as sightings of the Loch Ness monster – the chances of success on that play were minuscule at best.

It was not the inaccuracy of the last lineout though, which was ultimately the fault.

It was the all-too-familiar failure in leadership.

And not just the captain James Slipper but the team’s player leadership group entirely.

This is unfortunately passing on through the generations of Australian rugby players now and is a collective issue for both the state and the national teams.

I can remember during my time as a media manager with the Wallabies, when the team coached by Robbie Deans was second in the world for the bulk of his tenure – and wouldn’t Australia kill for that now? – it was judged almost exclusively on its ability (or inability) to regularly beat the All Blacks.

On eight occasions from 18 games Australia led New Zealand at halftime. It only won three of them, while another was drawn.

The quality of the collective leadership within that All Blacks team was unquestionably the difference.

Ma’a Nonu, who is a good friend and played in nearly all those matches, told me that the All Blacks never doubted they would beat the Wallabies, as they knew their opponent would panic and make errant decisions when the game reached ‘squeaky bum’ time.

Many hold a view that a draw last weekend was no use, it was nearly as bad as another loss.

For a team in the state of the Wallabies in terms of global ranking and mental fragility, sharing the spoils with Ireland was nearly as good as a win.

Ten years ago, on the same day Kurtley Beale scored in the 80th minute to grab the Wallabies a dramatic 14-12 win in Wales, the All Blacks scored three tries yet lost 38-21 at Twickenham.

After the game the question was asked of Wallabies captain Nathan Sharpe as to whether it was disheartening that the Wallabies had scored only one try.

The perplexed player answered: “Well, we won and we scored the try that mattered”.

At the same time down the M4, if you had asked the All Blacks which dressing room they would rather have been in at that moment, few would have said Twickenham.

Marcus Smith kicked the ball into touch knowing he was deciding the game as a draw.

The Wallabies kicked for the corner knowing they were passing up the chance to draw.

Given the choices made and the outcomes achieved, which dressing room do you think would have been the happier one at fulltime?