Frost heating up: The moment that summed up why young gun is a Wallabies star in the making

On a Spring Tour where little wins have been few and far between, the development of Nick Frost has been one of the real developments for Australian rugby and indeed the Wallabies.

Colossal in the air and around the pitch, the 23-year-old has gone from promising Super Rugby player to Wallabies starter in the blink of an eye.

Indeed, less than a year ago the 206cm lock was eyeing up a move to Japan, having caught the eye of former Wallabies coach Robbie Deans.

But after being one of the big movers earlier in the year, then-Brumbies coach Dan McKellar started to put the heat on Frost as to whether he wanted to forgo the opportunity to play for the Wallabies. Until then, Wallabies officials believed he was one for the future, but even then the 2023 World Cup might have been too much of a stretch. 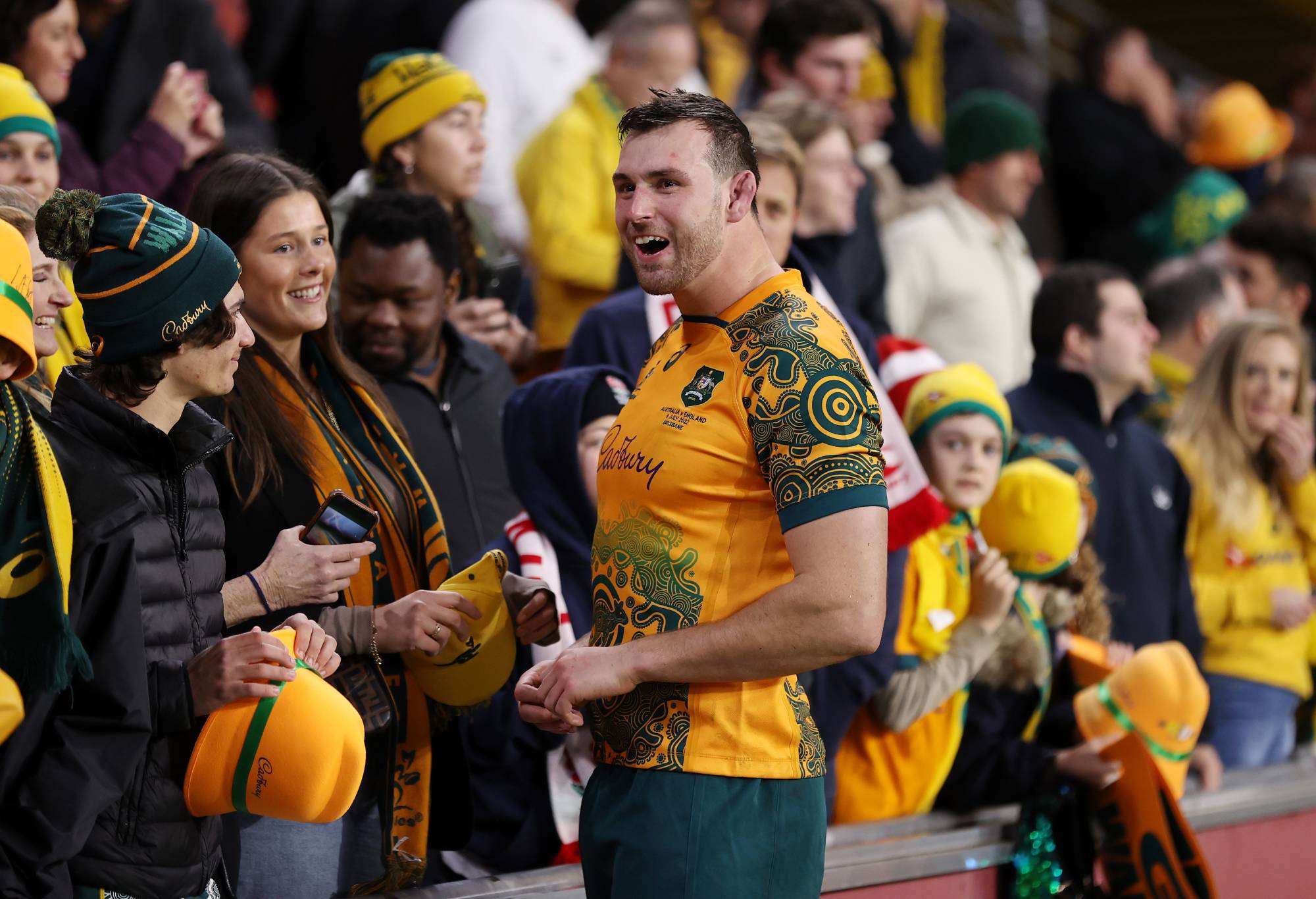 “I’d always wanted to from the get-go,” Frost said. “We asked Rugby Australia for feedback on x-y-z and made my decision based on that. Then as soon as they came back, Dan was a big driver of that, we spoke around that and it was an easy decision to stay after that happened.”

The sight of seeing Frost raise his arms in the air and let out a roar in triumph in the 50th minute after the Wallabies won a crucial penalty after defending their try-line at the Aviva Stadium was something to behold.

This was a young man in a battle riding the emotion of the boisterous crowd at Lansdowne Road. It was exactly what you wanted to see from a young man wearing gold. It was the type of moment that All Blacks great Sam Whitelock, who Frost spent time with at the Crusaders in their academy after completing high school, would have celebrated.

“We speak about celebrating the small wins as a team from the first minute to the 80th,” he said on the moment. “It gets a bit of energy through the group.”

These are valuable matches for Frost and the Wallabies as they attempt to work out who’s who in the zoo ahead of next year’s World Cup.

With versatile forwards like Ned Hanigan and Jed Holloway in the squad, with Rob Leota an outside chance to return ahead of the tournament, competition will be fierce for a spot in next year’s 33-man World Cup squad.

In all likelihood Dave Rennie will only take four second-rowers to France, but Frost is making a fine late run to put himself firmly in the mix.

With Rennie only able to pick three players over from overseas at this point in time, his rapid development could well make it easier for the coach to bypass the likes of Will Skelton and Rory Arnold and exclusively pick from the backs. Izack Rodda’s return will also add to the depth of Australia’s locks.

For now Frost is simply enjoying living out his dream. “(I’m) enjoying my time. It’s good fun,” he said.

“You’re ticking off bucket list stadiums. All the different national anthems and there’s a big culture of singing songs in the northern hemisphere … it’s a different atmosphere to the Southern Hemisphere. Those big moments you enjoy. You don’t want to shy away from them.”

But while Frost is riding the wave, defeats for the Knox Grammar graduate hurt. 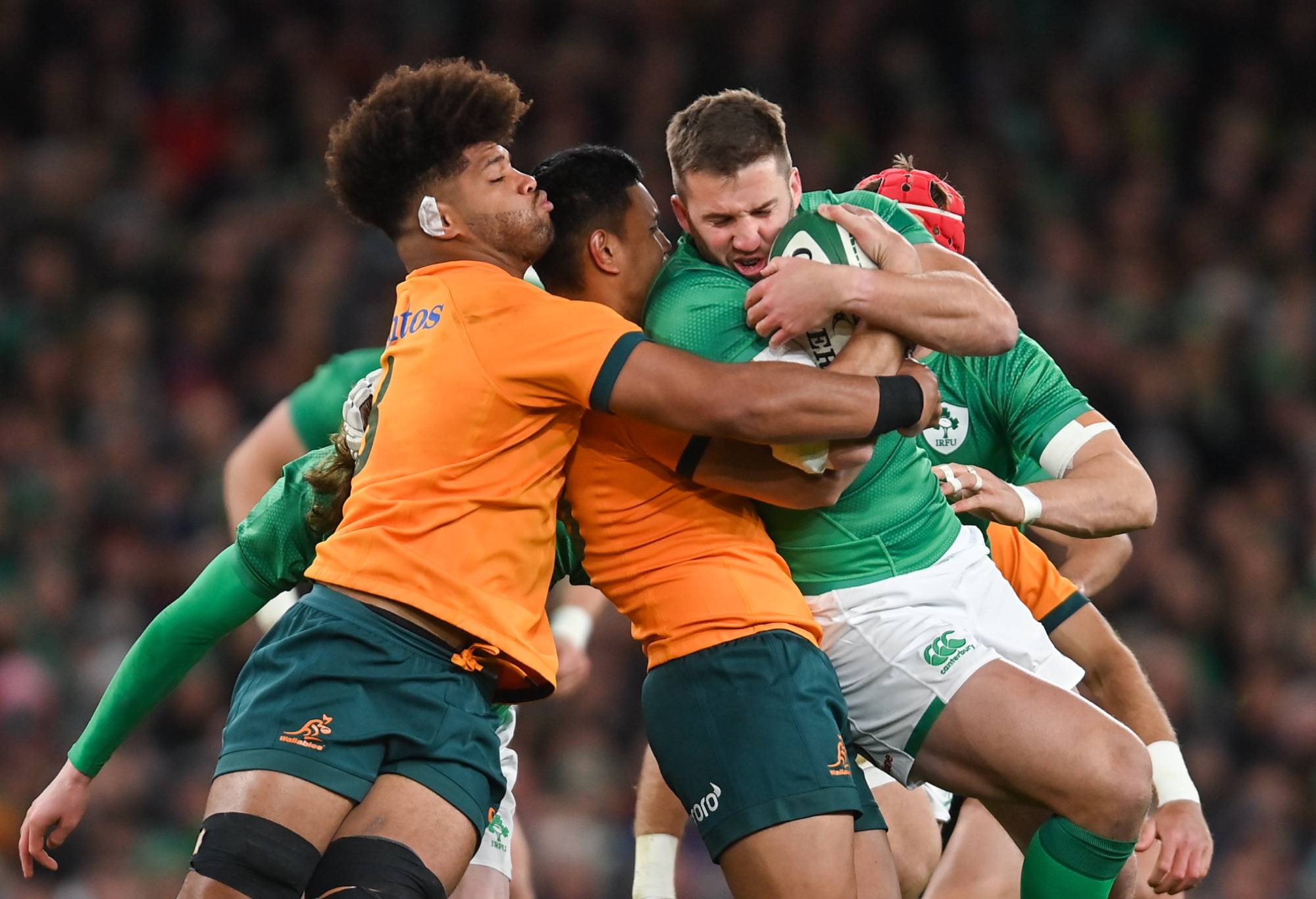 Stuart McCloskey of Ireland is tackled by Rob Valentini, left, and Len Ikitau of Australia during the Bank of Ireland Nations Series match between Ireland and Australia at the Aviva Stadium in Dublin. (Photo By Ramsey Cardy/Sportsfile via Getty Images)

“It’s another loss but every loss hurts. We’re just disappointed in the result but there’s a fair bit of resilience in the group with the adversity we faced out there,” he said.

“Injuries, losing people early … so there’s an element you’re semi proud of but other than that it’s another loss which you’ve got to cop on the chin, which hurts as a group.

“Unfortunately (the injuries have) been a theme of the year. We’ve tried to come through that adversity and it’s next man up policy. You know what your job is and your role. It’s about executing out there.

“We just need to complete games. We’ve had a few games now with very narrow margins that we’re on the wrong side of. It’s disappointing and we know we’re better than that. We want to put in performances the country is proud of and can get behind.”