To fix the Wallabies, we need to fix the real problems

Well, here we are. Another woeful northern tour, the Wallabies languishing in the rankings, and the standard blaming of coaches and players.

For the past 20 years, rugby union in Australia has been on a steady slide into the abyss.

Can it be fixed? Maybe.

But there’s going to be a whole heap more pain if we want the Wallabies to be truly strong again.

Our solutions will not be found by hiring coach X or recruiting player Y from league and expecting them to wave a magic wand. To do so is akin to renovating a house with a crumbling foundation.

The answers are to be found in Miyamoto Musashi’s Book of Five Rings.

Musashi was a ronin (a wandering samurai without a lord) who had 61 death duels without loss, and in 1645 he wrote Book of Five Rings, which has been used by businesspeople and warriors alike.

In the first chapter, ‘The Book of Earth’, Musashi explains the need for the samurai to understand the way of all professions; the artisan, the farmer, the carpenter. In the same way that a builder must ensure that a building has a solid foundation to make it strong, and a carpenter carefully selects quality wood suitable to creating a piece of work, the samurai must ensure their skills and weapons are strong and sharp.

If the Wallabies and Super Rugby teams represent the house, then it’s in dire condition. The national side is facing its worst season in 64 years and Super Rugby franchises are only competitive against other Australian sides. 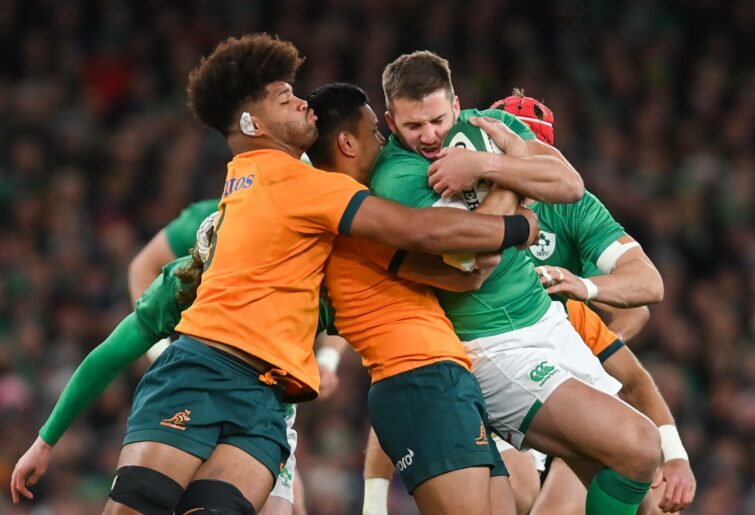 Stuart McCloskey of Ireland is tackled by Rob Valentini, left, and Len Ikitau (Photo By Ramsey Cardy/Sportsfile via Getty Images)

Then there’s the foundation. The disconnect between elite and the grassroots is pretty well documented and discussed, so I won’t add to it, but that leaves a large crack in the foundation. Very ugly indeed.

Fixing a house in that situation requires a substantial investment of funds, something RA doesn’t have much of. The best option is to pursue the private equity model.

The problem there is that the Wallabies’ stocks are at all-time low, so interest may not be that great. You can’t polish a turd, but two World Cups and a Lions tour may entice a suitable investor.

The next step would be centralising coaching, playing rosters, admin, the lot. This will produce a great wailing and gnashing of teeth from the more parochial of us, but for the code to succeed, everyone must pull together.

The benefits could be huge for the grassroots, our foundation.

Fountain Gate Secondary School in Melbourne has a rugby program that links to the Rebels while keeping students at school. I believe there are plans to extend the program to other schools, but why is this even a ‘plan’? With proper funding from RA, it should be happening already.

Further, with funds gained through private equity, similar programs with multiple schools linking to Super Rugby teams could be initiated. An Auskick-style program could be developed, and clubs given realistic funding to help the code grow.

With the foundation fixed, in time, the results will come.

But what of the national team?

Again, without access to adequate funds or a change in selection policy, it’s going to be hard. Private equity and centralisation might enable RA to make suitable offers to players currently overseas, and to have them play in Super teams alongside the guys they might be playing alongside in the Wallabies, thus developing partnerships in key areas.

At the moment, the Wallabies don’t even have an established and solid halves pairing.

In the absence of funds to achieve such things, the best option is to casually drop the Giteau’s Law tosh and go open slather on whoever is the best.

Cue the cries of “but that undervalues the jersey”, but, then, so does losing to Italy and being eighth in the world.

What about the current players? Many are young and inexperienced. In 1998, the Wallabies destroyed England 76-0 at Lang Park. That side was coached by Clive Woodward.

Many of the current players will not see the Wallabies taste success, for reasons ranging from age through to poor form, but some will survive.

Seasons like this can harden players up. We need the Wallabies to be as hard as nails.