DUBLIN – The Wallabies’ worst fears have been realised, with Taniela Tupou in huge doubt for next year’s World Cup after rupturing his Achilles.

Tupou was one of five players forced off during the Wallabies’ agonising 13-10 defeat to Ireland at the Aviva Stadium.

The wrecking-ball prop was joined on the sidelines by Hunter Paisami (MCL), Andrew Kellaway (fractured foot), Dave Porecki (concussion) and Rob Valetini (syndesmosis) as the Wallabies’ year from hell continued.

All five players, as well as Nic White (mandatory stand down after being ruled a criteria one concussion risk), will miss the Wallabies’ season finale against Wales, where Dave Rennie’s must win or risk going down as the first Australian team to lose 10 Tests in a year.

Rennie said the incredible injury toll, which has been a constant throughout the year, was down to “bad luck”.

“The medics are going to be busy,” Rennie said following the three-point loss to the world No.1 nation.

“[It is] bad luck. It’s a collision sport and a number of those were from collisions. We’re still assessing things.”

By Monday, the Wallabies were coming to grips with their torrid injury toll, including the unexpected withdrawal of White.

White, who told reporters in Dublin that he hoped to take the field at the Principality Stadium, was ruled out in curious circumstances. 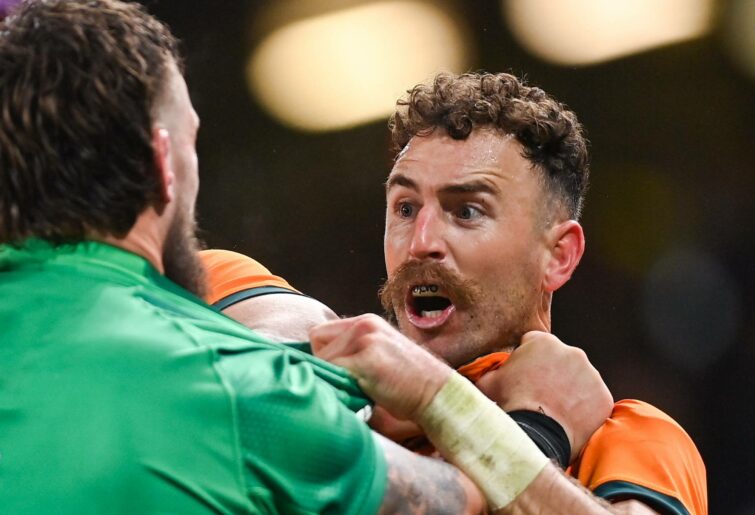 The halfback was involved in two separate incidents where it appeared he suffered blows to his head.

After medical officials were reviewing footage of the first incident, where White attempted to tackle Mack Hansen into touch, the halfback suffered another knock to the head as he ran the ball back into the defence shortly after.

That led to the Wallabies’ medic calling for a Head Injury Assessment under the criteria two ruling, where diagnosis was not immediately apparent.

Under the level two criteria, White passed the HIA and was therefore eligible to return to the field. The decision was slammed by social media, including lobby group Progressive Rugby, who questioned whether the HIA protocol was “fit for the purpose of properly protecting players”.

However, upon review, the match day doctor elevated the HIA to a criteria one assessment (balance disturbance/ataxia) and must therefore have a 12-day sit down period.

A Rugby Australia spokeperson said White had not experienced any concussion symptoms the morning after the match.

Tupou left the squad the day after their loss and will be operated back in Australia.

The rest of the injured brigade will leave over the coming days, with Wallabies officials scrambling to find flights home at this late hour.

With French-based lock Will Skelton and Japanese-based playmaker Bernard Foley unavailable for the Test because the match is being played outside the international window, Rennie has previous few players to turn to now. It’s understood he will turn to within rather than draft in any player from the outside.

It means the Wallabies’ fringe players, who were afforded opportunities against Italy, will be given another chance to rectify the shock defeat.

In particular, Reece Hodge looks set to return to the midfield.

Hodge started against Wales at inside centre in 2016 but hasn’t been viewed as a midfield option since Rennie took the reins in 2020.

Tate McDermott, Ben Donaldson and Jock Campbell will all likely come onto the match day squad.

Meanwhile, Tupou now faces a long road back to have any chance at competing at next year’s World Cup.

While playmaker Quade Cooper is hoping to be back playing by May after rupturing his Achilles against Argentina in August, the recovery time of the tight-head prop is expected to be much longer.

It’s understood Tupou has yet to re-sign with Rugby Australia, but the governing body has decisions to make regarding his future because the prop was eyeing a sabbatical following the World Cup. Now he will miss the entire Super Rugby season.

More scrutiny is bound to come onto Rennie about the Wallabies’ training methods and their strength and conditioning program.

As one current Super Rugby official said earlier in the year following Leota’s injury, “I’ve hardly ever seen one Achilles in my career let alone three in one year”.